TGR had the awesome privilege of emailing with Professional Wrestler Colt Cabana (WWE’s Scotty Goldman). I am a big fan of his, not only because we grew up in the same suburb, but also because he is an awesome wrestler. If you were ever a wrestling fan, Colt gives you that old school feeling. He has great charisma, solid in-ring skills, and loves the sport. In my opinion he didn’t get a fair shot in the WWE. So while the internet is buzzing about Colt getting a chance in TNA Wrestling, TGR caught up with him to find out more about the young wrestling superstar.

TGR: You are the second wrestler we have interviewed, the first being Diamond Dallas Page. How do you think you would fair in a match with DDP?

TGR: So many of our readers would have seen you during your stint in the WWE. How was your experience there? Would you have changed anything?

Colt: Would I? Really? What do you think? Here’s one change I woulda made….I woulda not had me SUCK! LOL. WWE was a blast while I was there. It was a short, but fun stint. They wanted me to embrass the Jewish culture, which I didn’t mind. Im just hoping my next run’s a little more successful.

TGR: So you are wrestling for Ring of Honor, what is that like? Any plans of wrestling in TNA or the WWE again? How are the Indys and small venues different than WWE?

Colt: Right now you can watch me on ROH which is on Mark Cuban’s HDNet every Monday at 7ct. I actually love wrestling in intimate settings (or smaller venues) because I love interacting individually with the crowd to make them part of the show. That’s a real strong point in my performances. 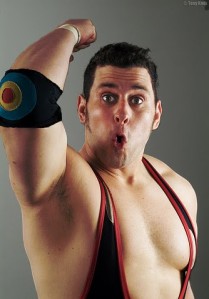 TGR: How did you break into the business? Where did you get your start?

Colt: I started training with two local guys on the north side of Chicago on Irving Park rd. It was called the Steel Domain and it’s since closed. I did that while attending Western Michigan University in Kalamazoo, MI. Id train on my breaks and during the school year. It was a blast, I wouldn’t of changed a thing.

TGR: As an alum of Deerfield High School (Illinois), same school as my wife, what is your favorite restaurant on the North Shore? Were you a Northbrook court or Deerbrook Mall guy?

Colt: My number one favorite place of all time is Barnaby’s Pizza in Northbrook on Skokie blvd. I’ve literally been all over the world and Barnaby’s is my favorite pizza. I also love Tony’s subs of course on Waukegan RD and Jerry over at Players grill in Highland Park on Deerfield Rd. always takes care of me and my family. I was both a Deerbrook and NBC guy, but Deerbrook’s basically now become a joke.

TGR: Growing up did you have a Bar Mitzvah or have any religious affiliation? If so, what was more nerve reckoning being on the Bimah or being in the ring?

Colt: I definitely had a Bar Mitzvah. North Shore Congregation. I remember I got braces like a month before it, I was pissed. I remember making jokes while on the Bimah. That was my first real show I guess, lol. We had a good house! I wasn’t and am not nervous for neither.

TGR: Who would your dream match be against? Would would be your dream tag team partner?

Colt: I actually recently fought in my dream match. I wrestled European legend, Johnny Saint (now 67 years old) this June in Shefield, England in front of over 1,000 fans. My dream partner would be the Boogie Woogie Man, Jimmy Valient! 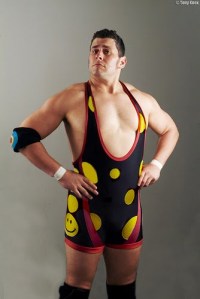 TGR: Who is the greatest Jewish wrestler of all time; Macho Man Randy Savage, Kevin Nash, Goldberg or Kane?

Colt: To be honest, I believe Goldberg is the only Jewish wrestler out of the ones you’ve named. So I’d go with Goldberg, although he wasn’t that good, lol.

TGR: Thanks for your time. It was great having you on the blog.  Is there anything else you want to share with the TGR audience?

Colt: Please support and learn a little bit more about me at www.myspace.com/coltcabana or follow me on twitter.com/DrColtCabana. Thanks and….Shalom!

And Let Us Say…Amen.
-Jeremy Fine