With our re-design of The Great Rabbino website we have interviewed a few current pro athletes. First up is Cleveland Browns kicker Greg Joseph. Joseph is coming off his rookie season (both in the NFL and Cameo). Joseph was a big part of the Browns revival. His leg has carried him to the NFL and he is making the most of his opportunities. He is a former Jewish day school student and all around good guy! 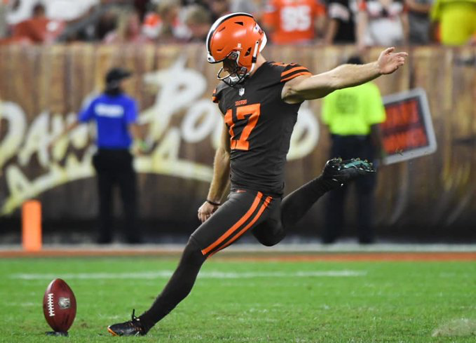 1) Tell TGR readers a little bit about yourself? I was born in Johannesburg South Africa in 1994, I moved to South Florida with my family in 2001. We have a very tight-knit family, which helped me become a very family-oriented person, they come first to me. I grew up my whole life playing soccer and supporting Manchester United. David Beckham was my idol back then, I did everything to imitate him from his hairstyles to his style of play. Now I follow his community involvement and still consider him a model of mine. When I moved to the states naturally, I got right into soccer, played at a pretty high level and won some prestigious tournaments. I played that up until the week before I started college football. I went to college at Florida Atlantic University right here in Boca Raton. Had an absolute blast during my college years, made some good friends, stayed close to my family and got to go to the beach every day after class.

2) How did you get into football? My guess is that football in Johannesburg, South Africa means soccer? I got into football when the head coach from my high school football team came out and asked me to begin kicking at the end of my junior year. I was one of the bigger soccer players and had a decent leg, so he wanted to see how I would fair kicking. My buddy who was a senior at the time was the current kicker, so it was fun to kick with him and learn from him.

3) After not being on the field for the Dolphins, what was the transition like straight in as the Browns’ Kicker? The transition from the Dolphins to the Browns was fast. After I got released from the Dolphins, I was at home for two weeks, just training and staying ready. Once I got the call to go up to the Browns everything happened very quickly. My tryout was on a Monday, the first NFL game I’d go on to play in was that Thursday. I am glad it happened that way, it gave me minimal time to think, and just had to go out there and react.

4) Browns had a solid year and were a story everyone followed. You were an important piece of the puzzle. What was the feeling in the locker room when the season came to an end? At the end of the year the locker room was a lot of fun. Obviously, not where we wanted to be at that specific time, as we felt we could have done a lot better throughout the season overall. The reason I say fun is because we are a young team and we showed how good we can really be. Next year will be exciting and I cannot wait to be improve, get back up there and be a part of it. We were proud of ourselves for finishing strong, but definitely not satisfied yet.

5) After a stellar college career and being FAU’s all-time field goal leader, you went undrafted. How did you remain positive and get to where you are now? Remaining positive was never an issue for me. I knew that very few kickers are drafted, and I had realistic expectations going into the draft. I will always have confidence in myself and my abilities, and I knew my shot was coming. I know I will have many more shots in the future and plan to make the most of them one at a time. I am extremely grateful for my time with the Dolphins, it molded me into the man and athlete I am today. I would not change a thing about my entire journey that got me to this point in life today.

6) What was your Jewish upbringing like? Was it hard to excel at sports at a Jewish Day School (Donna Klein Jewish Academy)? I am also grateful for my Jewish upbringing. It teaches you a lot about yourself as you get older and helps play a monumental role in life. It was not hard to excel at sports, as while playing school sports I was always simultaneously playing travel soccer as well. It was additional fitness and practice for me and helped me better myself as an athlete.

7) You seem to have a lot of fun on social media, now you are on Cameo, why did you decide to go on the website? Will see this with lots of NFL players? I simply went on cameo to help some people send some fun messages and wishes and make some money which will be donated to a charity of my choice. I have not decided on yet the charity yet (taking all suggestions). I think social media is great for promoting your brand and interacting with people all over the world. It connects us all, whether we know it or not. I definitely see the positive side and benefits of social media, and plan to use and receive it only in a positive fashion.

8) How can people find you on Cameo and other social media platforms? I am on cameo as Greg Joseph, you can find me here through this link :https://www.cameo.com/gregjoseph  – book me now for some fun messages and interaction while supporting a great cause! My instragram is @Gregj711 and my twitter is @greg_joseph1