Its Super Bowl week in Minnesota. The players, past and present, are here enjoying the Mall of America, great beer and all sorts of fun things. I was lucky enough to get a hold of a former Minnesotan; CFL and NFL coach Marc Trestman. Trestman was a NFL quarterback coach guru and then a champion in the CFL. But I know him best as the Head Coach for the Chicago Bears. After his stint with the Monsters of the Midway he eventually landed in Toronto winning another Grey Cup. As a Jewish sports fan, him being the Bears coach was amazing while it lasted. But I am always happy to see his success even if it wasn’t at Soldier Field. I caught up with the CFL legend to talk Football. 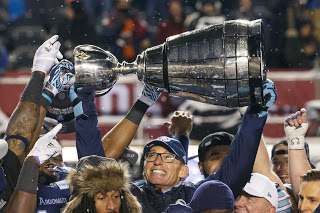 1) The Super Bowl is in Minnesota this year, a place you are very familiar with; what do you think it means to Minnesota to be hosting?

It places Minnesota on the world stage. There is a lot of pride in that city. I am proud of the city, growing up with the Vikings. The Wilfs have done a phenomenal job with the team, the stadium and getting the entire city around it.

2) You have always been known as a tremendous offensive mind and an ability to work well with quarterbacks. Who was the best to work with and why?

Truthfully I do not have favorites. They were all great. At the professional level they mostly have certain characteristics in common. They are relentless, courageous and have an ability to transcend the locker room.

3) You have coached in both the CFL and the NFL. What is the biggest difference?

Set o rules. Both great leagues. Players similar in work ethic and love of game. Coaching is coaching. Enjoyed both.

4) Looking back on your time with the Bears, is there anything you would have done differently?

You learn from every situation. I learned from it and have grown as a coach because of it. Anytime you learn its a good experience and leaders always are trying to learn and get better.

5) You have found the ultimate success in the CFL. What makes you so success up North?

Success is relative. Coaches are all leaders and that is the reason they have jobs. I have found that a great deal lies on the shoulders of the quarterback playing at a highly efficient level. Toronto has been remarkable. We have great owners, resources, and general manager. We are blessed with good players who love football and a great coaching staff.