TGR is kicking off College Basketball week. We begin with D1 player and former Maccabi participant, Ben Resner. His life long dream is coming true and it looks like Stoney Brook could be headed to tournament, so pay attention to Resner and SeaWolves. 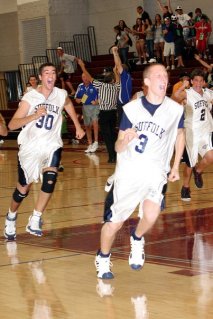 2) When did you start playing basketball? When did you realize you were good enough to play in college?
I’ve played basketball legitimately my entire life. There is a picture of me playing basketball (on a smaller scale) on my first birthday. I eat, sleep, and breath basketball. I went to see Hofstra play when I was around 11 and I always thought I could play around that level if I worked hard and reached my potential.

3) Is it true you played for the Maccabi Games back in the day? What was that like?
I actually played in a couple Maccabi games. I played for Suffolk County for 3 years, the last of which we won gold on a 3 pt buzzer beater I made in the championship. I also played for team USA in the Pan American games where we also won gold. All of them, especially those two  I mentioned were great experiences traveling, winning, and building friendships that I will never forget.

4) How’s your experience been at Stoney Brook?
My experience at Stony Brook has been up and down. Im very grateful for the opportunity that the coaching staff has given me, but I have a lot of unfinished goals that I am still trying to reach in the next two and a half years.

5) Does the team have a shot at the NCAA Tournament?
We actually lost to Boston University in the America East championship last year on two free throws with two seconds left. This year, we are in first place in the conference and everyone is expecting this to be the year that we win the championship and make the tournament. If we dont, everyone will see this season as a failure.

7) What are your plans after your playing days at Stoney Brook?
After my career is over here, I am hoping to become a college coach at the Division 1 level. I love to scout/recruit, and hopefully one day will have my own team to try and lead to the tournament.

9) Do you know any other Jewish basketball players in the NCAA? Any to watch out for?
I know Josh Elbaum, who plays at Vermont, because we basically grew up playing together. I dont know any others personally but I know Jake Cohen from Davidson is a great player.He actually won the Maccabi Gold my second year.

Thank you to Ben. Good luck this season. We will be watching.
And Let Us Say…Amen.
– Jeremy Fine