He is a baseball player and author. And a Jew. Aaron Pribble took time out of his busy schedule to speak about his new book “Pitching in the Promised Land.” 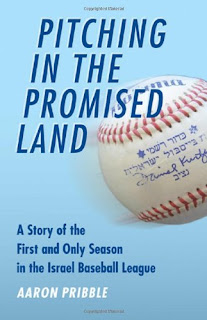 1) Tell TGR a little bit about yourself?

I was born in San Francisco and raised just across the Golden Gate Bridge, which makes me a Giants, Niners and Warriors fan. After receiving a scholarship to the University of Hawaii, I pursued my dream of playing professional baseball, which included two seasons of independent ball and one final summer in France. Thinking I was headed to law school, I decided while in Europe to become a teacher rather than a lawyer. Three years into my new profession I learned of a baseball league being formed in Israel. Since I’m Jewish and had played a little pro ball, this seemed like a natural fit. The rest is, as they say, history—and hopefully an entertaining story.

2) What is your book about?
“Pitching in the Promised Land” is, as the subtitle makes clear, a story of the first and only season in the Israel Baseball League (IBL). Or Bull Durham in Tel Aviv, if you like. Sandy Koufax is drafted in a symbolic gesture as the last player, there are six teams attempting to play six games a week on three nearly playable fields, the league runs out of money, players nearly strike, one nearly dies, and Dr. Ruth throws out a first pitch. My teammates include a DJ/third baseman from the Bronx, a wild-man catcher from Australia, an erudite Israeli pitcher, and several journeymen Dominicans who are much older than they claim to be. But baseball is also a lens through which to view a story about the politics and culture of the Middle East, about what we’re willing to sacrifice in pursuit of a childhood dream. There’s also a little romance with a tall, slender Yemenite Jew named Yael. She was pretty hot. In the end, after a successful if bizarre summer of baseball in the desert, I’m faced with the decision to give up a career in teaching in order to become the first player from the IBL to sign a professional contract back in the US. It is a heart-wrenching decision.

3) What was your experience in the minor leagues and how did it compare to pitching in Israel?
I played for parts of two summers in the independent Western and Central Leagues. In the Western League I pitched for the Sonoma Crushers under boyhood idol Kevin Mitchell and in the Central League I won a title with the Jackson Senators. Though independent ball is not affiliated with Major League organizations, the talent level is usually considered tantamount to Single A. Baseball in Israel was somewhat different. The rudimentary metric I uncovered was this: the more Jewish the player, the less talent he needed to posses. The IBL wasn’t quite sure whether it wanted to be the best Jewish league, or the best league in a Jewish country, so it settled on some amalgamation of the two. There were some incredible players, several of whom singed professional contracts after the season, and some other guys who might not have made a good college squad. “Bifurcated” is a word that comes to mind.

4) What was the highlight of your baseball career?
Tough one. I’d say signing my first professional contract, but that’s not really playing. Winning a championship with the Senators was the best, highest quality baseball in which I took part, but leading the IBL in ERA and finishing second in wins was also a huge thrill. Though to tell the truth, my two high school league championships are the most visceral, maybe the most sacred of them all, which is either pathetic or endearing. I still dream about fans chanting “MVP! MVP!” That’s heavy stuff for an impressionable, goofy eighteen-year-old kid.

5) Who is the best player you ever pitched to? What happened?
I hit several times against Mark Pryor in the California High School North-South All Star game, but that’s not the question. The best player I ever pitched to was Chase Utley of the Phillies, then playing for UCLA, which occurred during the first inning of my freshman season at Hawaii. He ripped a double to right off a loopy curve. Welcome to Division One baseball, meat. That guy can flat-out hit.

6) What are you doing these days?
I signed a contract with the Texas Rangers after my summer in Israel, and I’ve been with the Double A Frisco Roughriders for the past three seasons. Last year my ERA was—just kidding, that would be a story for Hollywood. Instead, after the IBL I returned to teaching high school history just north of San Francisco, choosing the more practical path over one last shot at my boyhood dream. (Not to give away the ending or anything.) I’m also coaching varsity basketball with my little brother Alex, former captain of the Cal basketball team, who teaches with me as well. It’s pretty awesome. The Schnitzel & Humus book tour will jump off once school ends in June.

7) Kinsler, Braun, or Youkilis?
Has to be Youkilis, that’s easy. Not only is he supersaturated with charisma, he was also a college teammate of my third baseman in Israel, the DJ/street artist Nate Fish. Both Youkilis and Fish are veritable characters, the former sans hair and the latter overflowing with shoulder-length curls. Fish once said Youkilis has never, ever, swung at a pitch outside the zone. He was not lying by much.

“Pitching in the Promised Land” is available online and at your local book store. Aaron also recommends we see “Holy Land Hardball.” A film about the summer of baseball in Israel.

Thank you to Aaron.
And Let Us Say…Amen.
– Jeremy Fine