Recently, I have spent some time reaching out to current and former Jewish NHLers. I got to speak with Colby Cohen. Cohen was a phenom at a young age and his tremendous skill led him to the NHL. Unfortunately, he didn’t stay too long. He shared his story with me and some advice for up and coming young hockey players. Cohen is a great guy and I was honored to interview him. 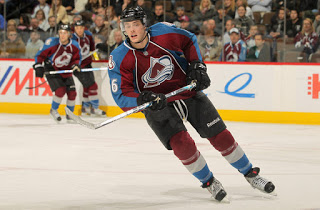 1) How did you get into Hockey?
I grew up around the sport. My mother and father were in involved. My mother was close to the Flyers organization and my father played himself. For any American kid, when it comes to hockey, its usually the parents leading the way. I have to give credit to my parents.

2) When did you realize your path would take you to the NHL?
When I was younger it was my dream to play in the NHL. I grew up watching the Flyers. As a kid you don’t realize how far fetched that idea is but you play believing the NHL is possible. It become more of a reality when I was a Sophomore in High School. I got on the radar and it became more realistic. BU started recruiting me as well as the US development team.

3) What was the most difficult thing about sticking in the NHL? Any advice for young hockey players?
In all fairness I wouldn’t say that I was able to stick in the NHL. My advice for young hockey players would be that plenty of guys can make the NHL. But its the consistency and putting your foot on the pedal that make the great players. Once you get there, you should work even harder to stay there.

4) What are you up to these days?
I am in broadcasting and work for an array of networks. I got to cover the Frozen Four, Regionals, and the  Olympics. Also, I am part owner of clothing company and we are growing. Its called Endeavor Athletic.
5) When aren’t a part of the game of hockey, what can you be found doing for fun?
I spend a lot of time with my dog and being outside. I continue to workout quite a bit.

6) What was your Jewish life like growing up?
I grew up in a Jewish household. Both of my parents are Jewish. We went to Temple and celebrated the High Holidays. I had to make a decision a a young age between hockey and Hebrew school. And that was my path, but even today this day there is a Jewish twist at all the holidays including Thanksgiving. I identify as Jewish. I wanted to go to Israel with US team but I wasn’t ready to go. I take a lot of pride in being one of the only Jewish players to play on that level.

7) Greatest Hockey player of this generation? Why?
I grew up watching LeClair, Lindros, Lemieux and was a fan at a young age. And Joe Sakic too. But then you become one of the guys. I got to play with Sakic and [Adam] Foote. I had their posters above my bed. The best player of the last ten years probably has to be Sidney Crosby. There is a case for Ovechkin and Kane but after all Crosby has done and all the accomplishments its got to be Crosby. Connor McDavid is playing at a higher speed and is a special player in his generation. The game is changing because it has too. I see things differently than I did as a kid.

8) Anything else TGR should know? Where can we find you on social media?

Yeah!  Check out my clothing company www.Endeavorathletic.com. And you can find me on Twitter (@Colbycohen36) and Instagram (@Colbycohen_) too!