There are few Jewish athletes I have wanted to interview more than Nate Ebner. Not because he is the best Jewish athlete playing right now, but he might be the winningest. It seems like wherever Ebner goes success seems to follow. From his days at the legendary Ohio State Football program, to playing a vital role on the Super Patriots, to his Olympic rugby run Ebner is a tremendous athlete and winner. With the NFL draft, my favorite day of the year, drawing near we spoke with one of the NFL’s best Jewish players of all-time.

1) What is it like playing for the Ohio State Buckeyes? Is the Michigan game as big of a deal for the players as it is for the fans?
Playing for Ohio State is an amazing experience.  More fans every Saturday than any other pro team or college team can say they have other than 1 or 2 exceptions.  It is also one of a couple of Universities that prepare you for the NFL at the level in which they do it.  Its nearly like playing professional ball the way meetings and practices and workout programs are handled.  The OSU Michigan game is a big deal for everyone, fans, players, coaches, the city of Columbus.  Its something you start talking about as soon as the football season is over and your starting to prepare for the next season.  We have a countdown clock that literally goes 365 waiting for the kickoff of “THE GAME.”  Every off season workout has some Michigan additive for motivation.  So when it comes time for the game it is as big of a deal as all the hype because its been hyped all year long and it doesn’t matter what you do all season if you lose that game its like having a losing season.  And a lot of the times, that game is very important because its at the end of the season when both teams have a lot on the line and need to win.

2) When did you realize that the NFL was a real possibility?
I realized the NFL was a real possibility after my senior season, having a great year on special teams, and my pro day at Ohio State where I put together a great day of numbers which would’ve put me among the top in the Combine in every single event we tested in.
3) You went from one of the winningest college programs to one of the most storied NFL franchises. What similarities do OSU and New England share?
They are similar in regards to how hard we work.  At both places it has been extremely hard work… but its been worth it.  We meet a lot in both places, we break down opponents a lot, and we work extremely hard on the practice field and in the weight room.
4) What is the best part of being a Patriot? What was your favorite moment?
The best part of being a Patriot is being a part of a winning atmosphere that is a product of hard work made up of a bunch of really good people.  Listening to Coach Belichick talk about how were going to go about each week or each day is great to be a part of.  My favorite moment has to be winning the super bowl… twice! No question.  There’s nothing like it. 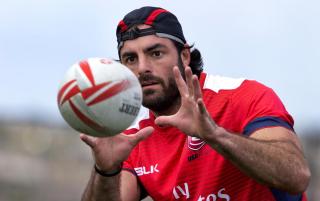 The Patriots were extremely supportive of me playing in the Olympics.  Did you see the shirts they all wore while my games were on!?  A lot of players throughout the team and league had reached out to me to wish me luck and let me know they’ve been keeping up and watching.  The Pats watched one of my games in the squad room as a team in between meetings and when I got back a lot of the players told me about it and what they thought and it was all very positive and supportive.

6) Would you consider playing rugby in the next Olympics? Is it hard to balance with the NFL?
I would definitely consider playing rugby in the next Olympics, however its a long ways a away and I have a lot of football in front of me until then so we will see when the time comes how my body is feeling or if its even in the cards.  But of course I’m always interested.  It was a long year last year going straight from an NFL season straight into training for rugby then touring the world trying to make the USA team and push myself to get myself where I needed to be physically to make that team.  Then go straight into another NFL season where we went all the way to the Super Bowl! So from a duration standpoint it was a grind at times, but I enjoyed every minute of it!
7) What was your Jewish life like growing up?
As a youngster I went to temple on Sundays with my dad.  We would celebrate the major holidays.  As I got older my football games were on Sundays so that interfered with going to temple.  I kept celebrating the holidays with family and still do when the football season doesn’t get in the way.
8) Do you, Julian Edelman, Bob Kraft and Andre Tippett ever celebrate holidays together?
We have yet to do so.
9) Outside of football and rugby is there anything else you work on; business, charity, etc?
I do as much charity with the Patriots Charitable Foundation as I can when I have time.  I also try to get into rugby as much as I can in my free time in the off season to help grow the sport.