In my mind Alex Jacobs is the coolest guy in sports. First he has now been giving the title “Mastermind” which is usually reserved for fictional characters. Second, and most importantly, he was the individual responsible for compiling the talent for Team Israel. Alex is a baseball scout for the Astros but quickly transformed into the “Fairy Godfather” for the Cinderella story of the Jewish people. Tasked with genealogy, productivity, and a people weighing on his shoulders Jacobs did not disappoint. We spoke with Jacobs, who literally holds my dream job (note the jealous tone) to hear his story and whats next for Team Israel. 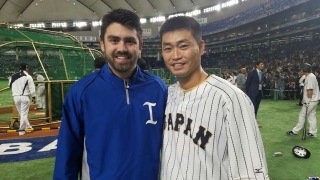 1) Tell TGR a little bit about yourself.
Born and raised an unhealthy Phillies fan in a suburb north of Philadelphia. Went to University of Massachusetts. Currently entering my 5 season a Professional Scout with the Houston Astros while living in Lakeland, Florida.

2)  How did you first get involved with Major League Baseball?
Ever since I realized that playing professionally was out of the question, I began trying to figure out how I could to work in baseball. I was inspired by the 2003 Phillies actually. It was during the pennant race and Luis Castillo popped up to Mike Lieberthal to give the Phillies a half game lead in the wild card. The camera panned to General Manager, at the time, Ed Wade in the Phillies Suite pumping his fist with an emphatic Wooo! I wanted to be in that suite and feel what Ed felt that day.

I went to UMass which has a rich history in churning out MLB executives. I had several internships on both the business and baseball operation side of baseball. Before the Astros hired me to be a Pro Scout I worked for the Astros (Business), Yankees, Tigers, Dodgers, and Rays. Astros hired me for the 2013 season.You are currently a scout for the Houston Astros.

3) What is that experience like and what does it entail?
It’s been fantastic. Kevin Goldstein, my boss, hired me at the 2012 Winter Meetings. My job is to scour the lowest levels of professional baseball and find prospects before they turn into “prospects.” I spend my spring and summers, for the most part, away from my family and travel around the state of FL inventorying other professional teams for the purpose of player acquisitions, free agency, preparation, etc.

4) In many ways you were the main man behind the scenes for Team Israel. What was your main job with the team?

First off, there were many guys behind the scenes with us. Ben Werthan, one of the best advance scouting minds in the game. He was nothing short of incredible taking the lead from our advance preparations of our opponents. Adam Gladstone was a logistical genius and backbone of the entire operation. Without him, this would have crumbled. Jonah Rosenthal and Guy Stevens, who both couldn’t make the trip due to their responsibilities with their MLB clubs were incredible resources and provides exceptional support through the tournament. Jason Lefkowitz, a MLB Scout with Seattle and more drove a lot of this as well. Obviously, this is Peter Kurz of the IAB’s baby and he deserves a lot of credit for how much this has grown. As far as my role, it had a lot to do with the construction of the roster and to know Team Israel better than anybody else knew team Israel. Also, to be used as a rubber board for Jerry and his staff to bounce ideas off of as well as give off ideas…the good, the bad, and even the ugly. But in the end, the entire operation; the staff, players, support etc worked together as a whole. We all had one common goal. This was a complete effort by everybody involved which is what made us the most prepared Front Office and staff in the entire tournament as well as what made this experience very special. 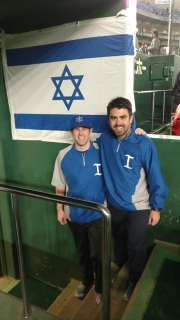 5) Was there ever a possibility of landing some of the bigger name MLBers like Ryan Braun, Ian Kinsler, etc? Did any show interest?
At first, we thought so, but seeing how long of a trip this was for some of guys, we knew it would be tough. We reached out to all of them, plus more. We 100 percent respect the opinions of all of the players and feel the best decision for them was whatever decision they made for themselves.

6) Will Team Israel make a play for Jason Kipnis or Paul Goldschmidt who have Jewish fathers but are Christian?
We did! We had communication with both. Remember as much as the guys on this team were “Jewish,” we were still representing the state of Israel. And, in the state of Israel there are many Christians who live there.

7) Do you think we might see Alex Bregman, Kevin Pillar and other pros join Team Israel 2021 knowing we can play on the big stage?
That would be fantastic. It was great to see Alex represent the USA as well as Kinsler. Regardless of who was watching, we do think that our performance in these games will make it easier to recruit for 2021. Whether it’s getting some of our players to come back and play again, or getting younger prospects to play for us in their prime. We do think there will be an uptick in participation where we most likely will have to make very difficult decisions as far as roster construction is concerned.

8) What is one thing you took from the Team Israel experience?
My favorite question to answer. 28 ball players who compete against each other for 140 or 162 games every year coming into 1 clubhouse to form this ridiculous culture. Look at Team PR and Team DR. This isn’t a regular baseball game, these are guys playing for more than a pay check, in our case we are playing for our heritage while representing the State of Israel while also trying to grow the game there. 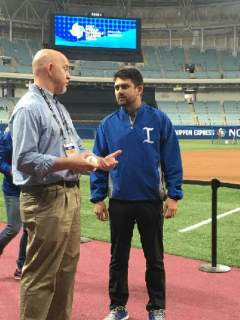 9) What are your career goals or is scouting your dream?
Sure I do! Of course the dream is to eventually run your own club and be the one who gives the credit to my staff on the club’s successes while accepting all the blame for any misfortunes. That’s the dream. But, in the end, I just want to make as much of a contribution to a baseball operations as I can.
10) What was your Jewish life like growing up?
It was good. I wish I took more advantage of the social aspect of it. I went to Hebrew school through being bar mitzvah’d. Then dropped out before confirmation but kept going to services as my mother was president of our synagogue and was very involved. I was in a Jewish High School fraternity as well. I hope that my contributions to Team Israel makes up a little for not completing my Hebrew studies 😉