While Team Israel continues to wow us all, its also time for the NCAA Tournament. Last year the Orangemen made a historic run to the Final Four. This year is a little different as they enter as a #1 seed in the NIT. But both Orangemen teams had something in common; Israel baller Ky Feldman. Great is a great young player beginning to make a name for himself. So in time for the tournament here is a good story about an up and coming Jewish baller. 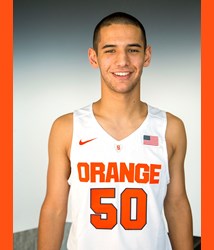 1) Tell TGR a little bit about yourself.
I was born in Israel. My dad was American, but he moved out there after a year of playing basketball at Long Beach State to play professionally. He played for a few years, and then he coached for a while. In total, he lived there for 15 years, and that’s where he met my mom. We moved to the United States with my little brother when I was 5, and we’ve been living in the Los Angeles area since then. I played high school basketball at Agoura High School, and I chose to walk on at Syracuse because my ultimate dream is to be a college basketball coach.

2) When did you know that you wanted to play college basketball and when did you realize Syracuse was a reality?
I think most kids that play basketball at a young age dream of playing in the NBA. By the time I got to high school, I realized that wasn’t an option for me, but I still knew I wanted to play basketball for as long as possible, no matter what level. I never even dreamed of ending up at a program like Syracuse, and the opportunity kind of came out of nowhere. Going into my senior year, I was planning on playing at Occidental College, a Division 3 school in Los Angeles. My goal was to play and be close to home, but a couple months into my senior year my dad found a connection that allowed him to send some tape into the staff at Syracuse. I had no idea about any of it until we took a visit to Syracuse. We went to watch a practice, and at that point I still had no idea of the work my dad had been doing. Fifteen minutes into the practice, coach Boeheim walked over and started talking to me, and he told me that he had seen me play and that he thought I was good enough to walk on to the team. Until I actually heard him say that, coming to Syracuse wasn’t even a thought in my mind.

3) What were walk-on tryouts like?
I didn’t try out for the team. I was offered a roster spot but no scholarship, and I took it without hesitation. 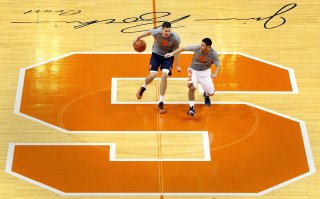 4) Whats something people should know about being a college walk-on?
I think the one thing people forget a lot is that walk-ons were all very good high school players, so even though there are a lot of great perks, being a walk-on can be frustrating because we’re playing a role that we’re not used to. It’s hard because we’re not competing like we’re used to, and it’s a completely different mindset on a day-to-day basis. Our goal every day at practice is to push the scholarship players and do whatever the team needs us to do. On game days, it’s about being good teammates and bringing energy to every game. Off the court, it’s about being a good influence and getting good grades. Our role and our goal is completely different than what we’re all used to, so it’s a difficult transition for some guys.

5) What was the Final Four run like last year? Was it more exciting that you weren’t a top seed?
The Final Four run was amazing. It was kind of difficult at the time to take it all in. We were so focused on winning the next game and advancing that we never really stopped to think about any of it. It wasn’t until I stepped out on to the court at NRG Stadium in Houston that it really hit me. Seeing 80,000 empty seats there and knowing they would all be filled to see us play made me realize how amazing what we had done was. That was when we all understood how blessed we were to have had the opportunity to play on that kind of stage. It didn’t turn out the way we wanted to, but it was still an amazing week. Being a 10 seed didn’t make much of a difference to us personally, but I know it definitely made a difference to the media and the fans, and a lot more attention was placed on us as a result. If it affected us in any way, I would say it definitely helped us because we had a “nothing to lose/ us against the world” attitude.

6) What is the best lesson you have learned from Coach Jim Boehim?
The thing that makes him so great is how simple he keeps things when coaching. Watching the 2-3 on television and because of the high level of play, I thought I’d get here and it would seem like he was coaching different game. Instead, I’ve always been amazed at how simple everything is, especially with the 2-3. It’s a very complicated defense, but he finds a way to break everything down into smaller, simpler parts, and at the end it all comes together. That’s why we play it so well.

7) What was your Jewish life like growing up?
Growing up in Israel and for the first few years living in the United States, we were very religious as a family. The longer we stayed here, the less observant we became. Now, I would not consider myself an observant Jew. I do not keep Kosher or Shabbat, but I do go temple often. During the season, we have practice every night, but in the offseason I try to go every Shabbat. For me, it’s more about the spiritual connection I feel while I’m at temple. That’s what’s most important to me.

8) Favorite Jewish food?
Definitely Jachnun. In Israel, we would all go to my grandma’s house every Saturday for jachnun, so now, eating it always takes me back to that time. I don’t have it very much now that I am in Syracuse, but when I do, it’s definitely my favorite.