Skip to content
I assume if you read my blog, interviews or checked out any of my social media accounts you would know I am pretty jazzed about Team Israel in the World Baseball Classic. Leading the way is Manager Jerry Weinstein who is a coach with the Colorado Rockies. Side note he is a great baseball follow on Twitter. I caught up with Jerry to talk Team Israel’s chances and Rockies baseball. 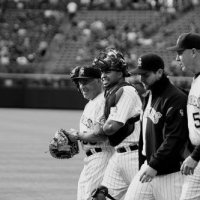 1. Had you ever been to Israel before coaching Team Israel?
I went to Israel in 2006 to coach the USA Maccabiah baseball team. There I began developing a close relationship with Peter Kurz (President of Israel Association of Baseball). Unfortunately I couldn’t be a part of Team Israel in 2012 because I started working in the big leagues.
2. What was it like to manage Team Israel?
It was a really good experience. The most amazing part was the instant bonding by the entire team. It was like they had been playing together their whole lives. The competition was great with two very good  teams with Brazil and Great Britain. MLB ran a first class operation.
3. Will you be managing Team Israel come March? Will the team look the same and contain the same players?
I will be managing team. I do not believe it will be the exact team but pretty close. We hope to have some of the current major leaguers. But if we didn’t get any of those guys it wouldn’t bother me because the team we had in Brooklyn was a great group.
4. Any of the young players to pay special attention to?
Our impact players were our veterans but Zach Borenstein was definitely notable. He has a tremendous work ethic. 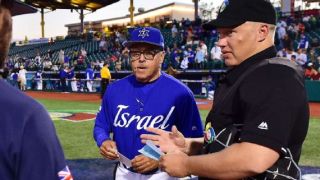 5. What are Team Israel’s chances in the WBC?
Its baseball so we have a fighter’s chance. We’d have a much better chance if we get some of the MLB high caliber players. Pitching will be our biggest challenge and we are not as deep with major leaguers as other countries.
6. What are you doing while you aren’t coaching Team Israel?
I work for the Colorado Rockies as a Special Advisor for Player Development and Scouting. I work both positions and work closely with the top catchers in baseball throughout Spring Training.
7. Is it true the altitude has a major impact on pitchers in Colorado?
Absolutely. At Coors the altitude effects how the ball flies. But if you pitch well in Coors you will have success anywhere. The field is built for offense so the pitchers will get more run support.
8. What was your Jewish life like growing up?
I grew up in a Jewish home. I was not Bar Mitzvahed or anything but we went to shul on the High Holidays. But I have always associated myself with being Jewish.