A few years ago I got introduced to a man by the name of Ron Rabinovtiz. Ron’s story befriending Jackie Robinson is something everyone should hear. Here is an interview I just conducted with Ron. You can book Ron at The Great Rabbino for an event. He spoke at my synagogue and did a fabulous job. @TheGreatRabbino 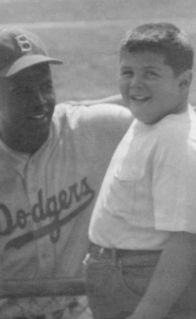 1) Tell TGR a little bit about yourself?
I was born in Sheboygan, Wisconsin and am the adopted son of David and Charlotte Rabinovitz.  At the age of seven I became a Jackie Robinson fan thanks to my Dad.  My Dad was a heartfelt Brooklyn Dodgers fan who held a deep admiration for Robinson.  After meeting Jackie when I was 7, Jackie and I formed an amazing relationship which began as pen-pals and grew into phone calls and many get-togethers.  We formed a beautiful bond and became the dearest of friends, sharing our lives with one another until Jackie’s death in 1972. In my teen years, I had the incredible experience of working closely with my Dad in the 1960 Presidential Primary reporting directly to John F. Kennedy.  My Dad was an attorney specializing in equal rights and was the Democratic National Committeeman from Wisconsin and later was appointed a federal judgeship  by President Kennedy.  My passion for politics continues today.

I was honored to be invited to speak twice at the Baseball Hall of Fame in Cooperstown, NY and have had interviews with The USA Today, CBS Evening News, CBS Radio, ESPN, The Week, Minneapolis StarTribune, St. Paul Pioneer Press, Chicago Sun Times, The Story with Dick Gordon on NPR, Larry King and George Washington University, just to name a few.  I am an active member of the Jackie Robinson Foundation, The Baseball Hall of Fame and The Create A Memory Foundation. In 2011, Major League Baseball Productions created the documentary, “Letters From Jackie”, and The History Theatre in St. Paul did a play entitled, “The Incredible Season of Ronnie Rabinovitz”.

2) When/where did you meet Jackie Robinson? What was that like?
I met Jackie in 1954 at Milwaukee County Stadium when the Dodgers were playing the Braves.  It was so exciting to finally meet my hero and I remember running up to him when he came out of the locker room and said, “Jackie, I’m Ronnie Rabinovitz do you remember me”? He said yes and my Dad said, ” How could you remember with the thousands of letters you receive”? and he replied that he remembered receiving a letter from my Dad on lawyers stationary.  And he said, “Keep in touch.”

3) Did you ever wonder why Jackie wanted to keep in touch?
I have often wondered why me?  We were so different.
I was White, He was Black
I was Jewish, He was Christian
I was a Kid, He an Adult
I was from a small city in the Midwest, He from a large city out East
And yet there was this bond of friendship and love.

4) What is the best Jackie story you have to share?
Probably one of the most exciting moments, it was my birthday and Jackie hit a home run and while rounding third base he waved to me as to say that was for you.  Later that evening Jackie was at my 10th birthday party dinner and to have Jackie singing happy birthday to me was beyond words.  Also when I graduated from high school he sent me a telegram.  He also took me into the Dodgers locker room and had the entire team sign a ball.

5) What is Jackie’s legacy today?
As I grew up, I realized how much more than just baseball he was.  He opened doors in the sports world, the business world and worked so hard for civil rights.  They say Babe Ruth changed baseball, Jackie Robinson changed America.

6) I have heard Jackie and Hank Greenberg bonded over their situations; Jackie ever share any stories about Hammerin’ Hank?
Hank Greenberg and Jackie did bond and became friends.  Hank went through so much and he realized how difficult it was for Jackie and he continually encouraged him to move forward.  Hank Aaron loved Jackie, as a young boy Jackie was his hero and the two of them became friends.

7) If Jackie were here today what do you think he’d think about the state of baseball?
I think Jackie would be disappointed with the state of baseball.  There are less than 7% of African Americans playing baseball today.  He would be disappointed in that.  In 1972 just 8 days before he passed away, he was honored at the World Series in Cincinnati and he said, “Thank you very much for this honor but I won’t be happy until I see a black face as a manager in baseball and an African American as a general manager.  Ironically, the first African American manager was also a Robinson, Frank Robinson.  On  January 20, 2009, I wrote an article entitled, “I wonder what Jackie Robinson would be thinking today?” as we had just inaugurated our first African American President.