Skip to content
You may have seen this amazing piece of artwork below. /www.jewishbaseballplayer.com and Greg Harris has really drawn up some amazing interest and excitement through his project. Contacted to this achievement has been his ability to help non-profits raise money. We spoke with Greg and he put us in touch with Norm Sherry as a way to collaborate. If you are a baseball fan you need this piece of Jewish baseball history and if you are a baseball fan you need to read more about the guy who helped Sandy Koufax become Sandy Koufax. Meet Norm Sherry. 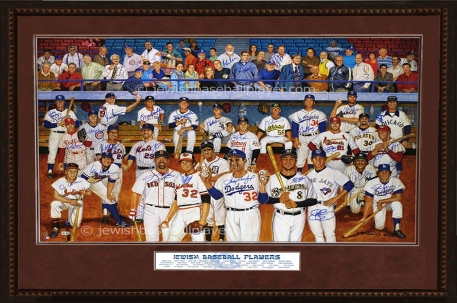 How was your experience with JewishBaseballPlayer.com?
It was a fun time. The people were so nice. There were a bunch of people there. It has been a long time since I have been around that many Jewish people all at once. It was nice.

What was your Jewish life like?
My parents weren’t religious but my grand parents were. My great grandfather was a rabbi. My mother and grandmother always spoke Yiddish to each other. But we never learned about being Jewish even tough my High School was 90% Jewish. In order to play in a ball game we needed to come to school the day of the game and it was the Holidays. So I went and I was there basically by myself.

Others in your family played as well correct?
Larry played with me in ’59. We also played winter ball together in Venezuela. Growing up we didn’t play much together because he was 4 years younger than me. He would come to the field with us and we’d stick him in right field. My youngest brother George played 1 year in the majors too but hurt his arm, his rotator cuff and never came back. My other brother Stan was in World War II.

Did Sandy Koufax go to synagogue the Yom Kippur he missed his World Series start?
I don’t knew if he went to synagogue. Sandy is a great guy, very down to earth. He never wanted the fame. Our lockers were next to each other. Once there was a young reporter and all the other reporters stormed him and the young kid didn’t get to ask his question. After the other reporters left, Sandy went up to the young reporter and asked him what he wanted to know. He was a great guy.

Are you still in touch with Koufax?
We are not really in touch. Last time we saw each other was 3 or 4 years ago. I did call him after he was on TV recently and told him he looked good.

Do you ever go back and do work with the Dodgers?
When there are moments of emotion. For example when the Dodgers celebrated the ’59 team. They are good about it and invite some of the old timers to come back.

What did you do after your playing days?
I managed in the majors for a little and in the minors as well. After my playing days I came back to Los Angeles and friends offered me a good paying job at JB Stevens, a carpet company. But then I was offered a manager job in Santa Barbara and took it. It paid a lot less money. Managing can be very taxing on a person, especially in the Major Leagues. Being a player was the best.

Again thank you to Norm, Greg, and the whole project. Check out http://www.JewishBaseballPlayer.com!!! It is amazing.