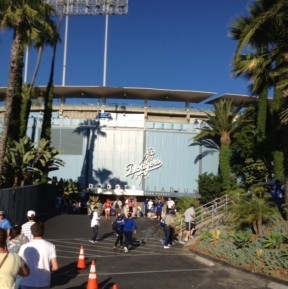 Last week I was at Dodgers Stadium for the first time. While I think my wife is starting to take a liking to my hobby of traveling the country to see baseball stadiums, we found ourselves in an awkward situation. At Dodgers Stadium, which is in Los Angeles—the second-largest Jewish community in the United States—we could not find kosher food.

Although I’m told the stadium does offer kosher alternatives, how is it possible that the Minnesota Twins can have a kosher cart but not the Dodgers? Luckily, the night we were there was Jewish Heritage Night, and there was a kosher stand where my wife could get her hotdog, but it left me puzzled.

My biggest issue with Judaism, across the denominational spectrum, is the inaccessibility of our religion. And kashrut, at Dodgers Staidum and other places, is in many ways the perfect example.

Since arriving in the Twin Cities, I have struggled with kashrut. I came from New Rochelle, N.Y. where there were three kosher restaurants, two kosher ice cream shops, a kosher grocery store and a kosher bakery all within a one-block radius of my apartment. Minnesota struggles to have any kosher restaurants; even Chicago, in my mind, does not meet the realistic needs and desires for kosher food.

Kashrut, like many other Jewish staples, has turned into a business. Most restaurants  cannot afford a full-salaried mashgiach (someone who watches over kosher food) or an expensive Te’udah (kosher certificate). When they do take these steps, they tend to jack up their prices to cover those costs, which adds to the already- rising prices of kosher meat or cheese. Eating kosher out costs families far too much.

Instead of being stringent on the laws of kashrut, should we not be stringent on making kosher food accessible? How can we as rabbis ask people to shell out money for the food regardless of quality? How can we ask people to live a modern secular and Jewish life when the choice is so often one or the other? Our hang-up is clearly that our food and utensils are being handled by the “other,” or someone less strict. And our fears have made it extremely difficult to encourage new Jews to take on this important mitzvah. It does not make much sense.

What I think does make sense is asking rabbis (I am perfectly fine that this decision is made in the Orthodox community) to find ways to hechsher (stamp of kosher approval) more establishments.

First, I would start small at ice cream shops and bakeries to help Jews in all areas keep kosher. Here in Minnesota, many of the Breadsmiths are kosher. Getting chains to sign on would be a major accomplishment. There are already ice cream parlors such as Menchies that carry a Te’udah (which is not accepted by all) and others receiving a Conservative certification from MSPKosher.com. How great would it be if Dairy Queen stores carried some sort of national label like Crumbs Cupcakes do? Try to convince Falafel Maoz in New York and other chains that can easily be kosher to carry a symbol and have local rabbis help in the checking of the operations.

Another approach is to offer a kosher menu in a not fully kosher establishment. This would be easier in chain restaurants or vegetarian establishment; like a local deli here in Minnesota called Cecils that carries kosher meat. There are obviously problems with this model, but there is also a lot of potential. We shun ideas like this because it is not what we have done. At the same time, very few people agree on the complexities of any Te’udah. Some people only recognize Orthodox supervision, some say Glatt Kosher or Cholov Yisroel, and there are issues like being open on Shabbat and the reputation of the Rabbi giving the supervision.

The fact is all of this discourages people from keeping kosher on any level and makes Judaism inaccessible. We need to stop pretending the biggest issue is the salt on the meat or which plant the food comes from and understand that our inability to offer an accessible option is the biggest barrier.

This post previously ran on JewishJournal.com, and some additional edits have been made.