Its been a while since we have had an interview. But hear is a conversation I had with author Richard Michaelson who has brought much attention to the forgotten Lipman Pike. 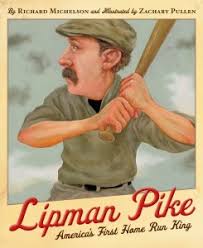 1)    Tell TGR a little bit about yourself?
I am a poet, children’s book author, and art dealer. I was born in East New York, Brooklyn, where my dad had a small hardware store. We were 100% secular (or rather, anti-religious). I had no bar-mitzvah, nor did I attend Hebrew school. My books explore issues of race and social justice.

It was not until my wife converted to Judaism —against my wishes–(she went into labor while in the mikvah; but that is her story to tell) that I began exploring my heritage. I have been fortunate to have been awarded the 2009 Sydney Taylor Gold and Silver Medal from the Association of Jewish Librarians—the only time in the award’s history that one author has been honored with their top two awards. Two of my books have also been finalists for the National Jewish Book Awards.

A few years ago, I was working on my children’s book A is for Abraham: A Jewish Family Alphabet .  My task was to narrow down all of Jewish knowledge into 26 letter. Takes a bit of chutzpah, but I agreed to try. So I decided to choose 26 general themes where I could discuss basic Jewish categories. For instance D is for King David, and under this letter I was able to write about the Biblical King, but also the Jewish traditions of poetry– since David is traditionally considered to have authored the Psalms. At one point K was for Koufax (K ended up as Klezmer), and I intended to discuss Jewish sports heroes. In the research process I came across the name Lipman Pike.   I asked many of my sports-crazy friends, and no one had heard of him. How could this be?

3)What did you learn about Lipman Pike?

Read the book!!  But here are a few tidbits: He was the first “professional” ball player—the first player, that is, accused of accepting payment when the League was still supposedly all amateur (of course many players were taking money “under the table,” but the Jewish guy got blamed ) . Lip therefore became known as “the first player “paid to play.” Partly because of this incident, the next year, in 1871,  the league changed the rules and allowed “professionals,” and formed the National Association of Professional Base Ball Players. Lip went on to be baseball’s first home run king.

Lip went on to a stellar career, and he remained proud of his Jewish roots. How could I not want to share his story? I would like to help him reclaim the title of baseball’s first superstar.

4) Do you have passion for baseball?

I am sorry to have to publicly admit to the Great Rabbino that I was never a big fan.  My prior knowledge began and ended with the famous game Sandy Koufax declined to pitch. My interest is in history. That said, I finished this project with a renewed respect for how sports have shaped the trajectory of our country.5) If you could do another book about a Jewish athlete who would it be?Stay tuned. I am working on one now (from the time when basketball was dominated by Jews).

6) Who are your World Series picks?

This summer I spoke at the Hall of Fame in Cooperstown, and I am working to get Lip inducted next year when they consider the old-timers (email me and I’ll tell you where to send letters—and while you are at it—he is also not in the National Jewish Sports Hall of Fame in Commack—a shanda, as they say—though he is in Israel). Here is a nice article which recently appeared in the Jerusalem Post Baseball’s Hall of Fame needs to recognize Lipman Pike

As for the coming fall– I am, as they say, on the road and peddling my wares. In the next few months I’ll be speaking about Lip in NY, Boston, Florida, and wherever else I am invited. Lots of Jewish Book festivals coming up! Check my website and join my mailing list or friend me on facebook to see if I am coming to your town! You can find me at www.RichardMichelson.com