TGR is, as you all know by now, big on wrestling. We have showcased Colt Cabana several times. Recently, I got a tip about another Jewish wrestler named Brimstone. Brimstone, like Colt, is an independent wrestler. In the old days all wrestlers started small, honed their craft, and then tried to make it to the WWE or NWA. Brimstone seems like that kind of guy. Old school in nature. He leaves it all in the ring. Personally, I would love to see Colt and Brim mix it up in the ring for the Jewish Heavyweight Title…hmmm…there’s an idea. 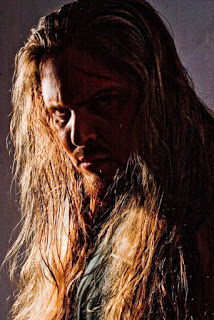 1) How did you get started in the business?

I had the opportunity to meet with a few icons in the industry at a small convention while I was working for the Village Voice’s sister publication, the LI Voice.  I’ll never forget meeting the Iron Sheik for the first time and him telling me, “you look like a wrestler, you should be a wrestler!” in that special ‘Sheik like’ way.  Following our intriguing conversation, Bret Hart approached me and offered his advice on getting into the business.  I took it as some type of omen that these two athletes of such high caliber would have any interest in talking to me in general, not to mention offering positive advice.  I found out soon after that there was a new professional wrestling school opening up in Queens, New York called The Doghouse.  To make a longer story as short as possible… I began training in 1996 under the tutelage of Homicide, Low-Ki (Senshi in TNA or Kaval in WWE), Laithon and the Original Gino Caruso (Super Calo in WCW).  The rest is history.  Eventually, I branched out and opened my own school Critical Mass Professional Wrestling and federation, the New York Wrestling Connection.

2) Where are you currently wrestling and have you ever held any championships?

Up until last year I was a mainstay at Pro Wrestling Revolution which was run by one of my former students, “Johnny Ova.”  It was a great promotion while it was open with a lot of homegrown talent to watch for.  Funny thing was it was run out of a church and I’m as Jewish as Jewish gets!  I did my time and paid my dues traveling in and out of the country, I am currently spending my time on marketing everything Brimstone.  I’m not a one trick pony; I have a comic book based on my character, a Brimstone video game in the works for Xbox LIVE, multiple film roles, television projects, my autobiography and the BrimWEAR clothing line.  Things are a bit too busy to be wrestling as much these days.  Add in family time, appearances and the vast charities I work with and I barely have enough time to think!  I love the business and everything it’s given back to me, but I also don’t want to be that guy in his sixties still bumping around the ring!  After thirteen years I figured it was a good time to start focusing on the continued branding of the name outside of the squared circle.  I did hold numerous championships while touring including the NYWC, NWA and Wrestling World Wide Heavyweight Championship as well as the NYWC, LIWF and PWR Tag Team Championship.  I’ve held others as well; however these are the ones I was proudest to achieve.

My favorite match of all time was when I teamed up with John “Earthquake” Tenta as an honorary “Natural Disaster” against the Bushwhackers.  It was an honor and a privilege to be asked by John to be his partner.  Luke actually ribbed me in the locker room before the event (which can be read about in my upcoming autobiography).  A couple of years ago, Luke and I were reunited at an independent event and he filled me in about how the rib came about… Tenta set me up!  Rest in Peace John, we miss you!!!

4) What are your future wrestling goals?

5) Which other Jewish wrestler would you most like to face and why? (Raven, Colt Cabana, Goldberg, or Randy Savage).

Barry Horowitz hands down!  Do you realize that Barry is one of the most under-rated and technically sound workers in the history of professional wrestling?  If I had to choose from your list though, I’d say Goldberg… for the simple fact that I’d like to see once and for all whose spear is more devastating!

6) What was your Jewish upbringing like? Do you do anything Jewish today? What is your connection to Judaism?

It’s very interesting… every time someone hears that I am Jewish, the normal response is, “Get out of here! You don’t LOOK Jewish!”  The truth of it all is that I’ve had a very close relationship with my religion throughout my life.  I began attending the Suburban Temple in Wantagh, New York at an early age for my religious studies and I continued there until my Bar Mitzvah on September 5, 1987.  I also stuck with the Suburban Temple Youth Group (SUYO) well after becoming Bar Mitzvah.  My summers consisted of being shipped to all Jewish camps such as H.A.N.C. (Hebrew Academy of Nassau County) and Camp Eisner in Massachusetts.  I’m not going to lie, I hated it at the time; but in retrospect it has made me a better person.  I learned a lot and had experiences that I may not have had otherwise.  I grew up in Uniondale, New York which is a predominantly black and Hispanic area; so it was a real challenge being the only Jew in the school, this included the teachers.  I became the official educator of basic Jewish studies whenever the holidays came around!  After I graduated elementary school, my mother signed me up for the Liberal Jewish Day School / American Jewish Academy as opposed to the local junior high school (middle school for you young folk) in which I attended until my last two years of high school back in Uniondale.  I may not look like your stereotypical Jew… but I’m certainly more “Jewish” than most!  Truth is, I am proud of my heritage and who I am.  I continue to try and give back to not only the community, but the Jewish community by making special appearances in Hebrew schools and Temples to talk to the kids about being all they can be.  I’m glad that I can show a younger generation that Jews can be strong athletes and be a dominant force to be reckoned with (especially in a sport not known to contain many Jews)!  My family and I try to attend Synagogue on all the religious holidays when my scheduling permits.  I was actually nominated for the National Jewish Sports Hall of Fame twice but have not been inducted.  It was nice to be thought of; I actually received some really nice recommendations… I guess pro-wrestling still isn’t considered a “real sport.”

7) Did you always want to be a wrestler? Who inspired you?

Actually, I have always loved wrestling… but my first love was music.  I was a drummer for a very long time and enjoyed success performing in bands for years before wrestling.  I was inspired to want to wrestle by The Undertaker, Shawn Michaels and Ultimate Warrior, each for specific reasons.  Although, I was also inspired by the people who paved the path for me to pursue a career outside of the ring!  If it were not for talent like Captain Lou Albano (like another father to me), Hulk Hogan, Mick Foley, The Rock… there would not be guys like me!  These are the people who blazed the way to prove that wrestlers can be more than just meatheads and can be successful in all of entertainment.  I’m a business minded and goal oriented person, so to see what these guys have accomplished and to emulate that… that is truly inspiring to me.

Any match where both parties can display their strengths and tell a story in the ring.

Well I love Trish and Tammy… but I would have to side with closer friends of mine and make it a three way tie for Diva between Torrie Wilson, Missy Hyatt and Dawn Marie.  Trish however is the best worker of the bunch, there is a huge difference.

10) Do you watch WWE and if so what do you think about WWE NXT?

I have not ‘watched’ wrestling in years except when I heard Bret was doing a stint back on WWE.  Every so often I’ll tune in to see friends, but for the most part I am not crazy about the direction they have taken.  Truth is, wrestling back in the day was something that families could watch together… Grandparents to little kids!  Nowadays, it has gotten to a point where it is extremely raunchy.  I won’t even let my kids watch the product and they know a lot of the guys personally.  TNA has been taking that stance as well which upsets me.   Only thing I know about NXT is that it is similar to the Tough Enough project, but utilizing the boys who actually deserve the opportunity.

Big Thanks to Brimstone for hanging out with TGR. For more on Brimstone check out Entrancetohell.com or http://www.thebrimstoneroast.com.
And Let Us Say…Amen.
-Jeremy Fine